In fact, around 4,070 (almost 55%) of the people who moved into South Somerset during that period came from the neighbouring regions of Devon, Dorset, Wiltshire, Cornwall and the rest of Somerset and Bristol.

Of those who moved into the region, 22% came from other parts of Somerset and Bristol with Mendip and Taunton Deane making up around 1,000 of the 1,670. 18% moved into the area from Dorset, with those from West and North Dorset making up the majority at 700 and 330 respectively. 8% moved from Devon with 200 from the East of the county; and just over 4% came from Wiltshire. 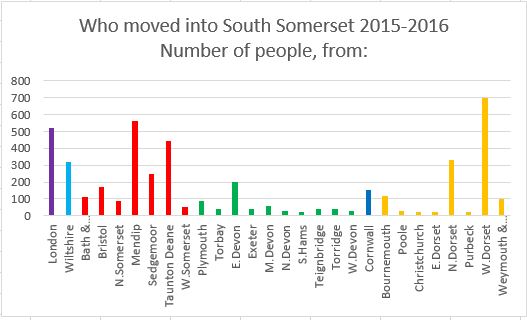 The numbers who moved out of South Somerset paint a similar picture, with just over 28% moving to other parts of Somerset and Bristol with Mendip and Taunton Deane being the highest-ranking destinations. Neither of those higher than West Dorset though, which alone took 720 newcomers from South Somerset equating to more than 10% of everyone who left the region. Of the 1,120 people who left South Somerset for a new home in Devon, around 500 of those headed for Torbay.

Exactly the same number of people, 150 moved each way between South Somerset and Cornwall.

The remaining numbers moved to and from South Somerset, to and from other parts of the UK – interestingly, no-one moved to the region from the Cumbria and Derbyshire areas and very few came from the North of England and the West Midlands. 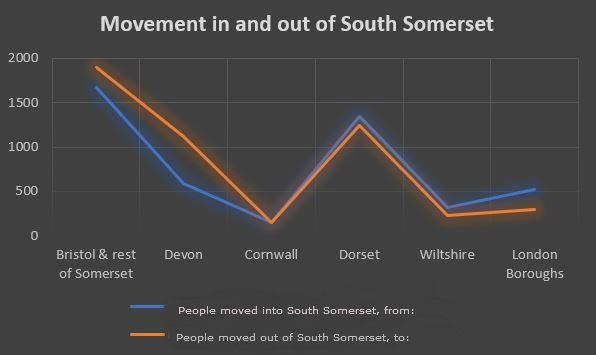 So, where are the Londoners moving to?

Of all the regions in the South West, Somerset and Bristol are the most popular for migration to and from London. A surprising 4,210 people moved from the London Borough’s into the City of Bristol during the period while around 3,550 left Bristol for the Capital. In total, around 8,710 people moved from London into the whole of Bristol and Somerset while 7,230 made the opposite move.

The pictures for Devon and Dorset were pretty similar with around 4,670 and 4,830 respectively moving in from London, and 3,810 and 3,550 moving out to London. Bournemouth seems to be a particular hot spot, with 2,250 new people from London and 1,950 leaving the coastal town for the big smoke.

Cornwall saw 1,900 newcomers from the London Borough’s while 1,250 people moved from the western-most county into London.

The figures show that there is more movement in and out of cities than rural areas, reflecting population numbers as well as industry. The lure of the Westcountry is no longer almost exclusively for retirees as was the case a few years ago – wellbeing and balance of life are an increasing priority for the career-minded 30-50 age group and the Westcountry is richer in major employers than ever before. We welcome thousands of new people to the Westcountry from London every year, but we also say goodbye to almost as many, who leave for the big city. What the figures don’t reveal are the numbers of people moving back to their original home regions - I wonder how many of those who make the move from the Westcountry to London eventually return? And on the flip side, how many Londoners settle here long term and how many miss the hustle and bustle of our great capital? Now they would be interesting statistics…! 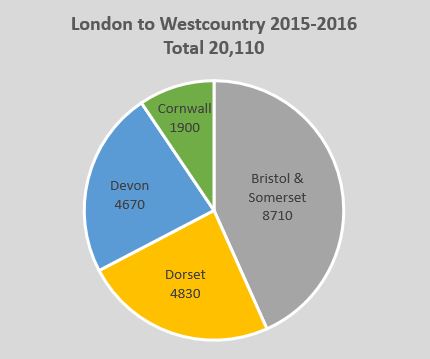 https://orchardsestates.com/blog/are-london-buyers-skewing-house-prices-in-south-somerset
Go back to the blog

Our late spring Westcountry exhibition held in conjunction with Lawson and Daughters in Fulham London was a great success The area was was lively and...

Somerset first-time-buyers are getting onto the UK's property ladder with ease....

One of the recurring questions we get asked by people selling their homes with us is ‘Should I accept this offer?’ Depending on our response this is...